José María Paz Casañé, the president of Real Madrid's electoral commission, gave the opening address and announced that: "After having examined the only candidacy presented within the stipulated deadlines, and given that it satisfied the imposed requirements and by virtue of article 40, section e), point 2 of the club's current bylaws, Mr Florentino Pérez is declared president".

Following the screening of a video featuring the club's on-field successes over the course of the past four years, the president, who is about to embark on his fifth term of office, opened his address by expressing his thanks to the club's members for their support: "At the heart of all of this is the togetherness that exists between everyone and it's essential to the winning formula at this club. When there's unity, this club is unbreakable and this enables us to look to the future with optimism. Our members bear our values and history. We've got 115 years of history behind us and that's thanks to their loyalty and the passion they show for this badge and our shirt. We've witnessed their affection and drive, just as we have with all of the Real Madrid fans from all over the globe, those who make madridismo universal".

Pérez also spoke of the ambition which has always characterised the club throughout its history: "We're embarking on a new term after having experienced one of the best seasons in our history. My dedication and commitment will always be there as I seek to maintain the club's values and secure as many pieces of silverware as possible. We'll work hard to ensure that Real Madrid is named the best club of this new century. Real Madrid is legendary for its excitement and the accomplishment of impossible challenges throughout over a century of history. Our club is, and should be, one where the utmost is demanded, because the dreams of our members and supporters are the only things that define the direction we take. We have to give our best to make sure that this club lives up to its past".

As for the club's on-field feats, he commented: "Real Madrid has once again done something that nobody else has achieved to date. On the footballing side of things, we've built a legendary team featuring the best international and Spanish players, in which our academy also enjoys a prominent role. We're a team led by Zidane, a symbolic figure for madridismo, who in a short space of time has become the best coach in the world. In basketball we've got a modern side who play some stunning basketball that the fans can identify with. We've lifted 19 pieces of silverware in four years, but we're constantly looking to exceed ourselves and must maintain and build on this cycle of trophies. We'll go about our work without any complacency to go on making history".

During the course of his address Pérez also referred to the Santiago Bernabéu and Real Madrid City: "We've laid the foundations for the renovation work on the Santiago Bernabéu, with the work set to make the stadium into an iconic state-of-the-art landmark that the city and our fans will be proud of. Real Madrid City is constantly expanding and draws praise from those who visit it. Furthermore, we're on the verge of completing the construction of a corporate building and the club's offices".

Finally, the president spoke of the work carried out by the Real Madrid Foundation: "Our solidarity is expressed through the Real Madrid Foundation, we've opened over 400 socio-sporting schools and believe that it's vital to fly the flag for solidarity. We want to end up with 1000 social outreach schools". The event was concluded with a group photo featuring Florentino Pérez, the 16 members of the board of directors and the club's honorary president, Paco Gento.

Real Madrid's president and board of directors: 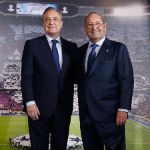