A Morata hat-trick and a James strike handed Real Madrid the three points.

4
Real Madrid couldn't have made a better start to what looks like being a demanding April. In their maiden LaLiga trip to Butarque, the Whites racked up their second successive win of the month to remain top of the pile. Right from the first whistle, the league leaders looked solid at the back and devastating up top. Indeed, the visitors raced into a three-goal lead with just over 20 minutes on the clock.

The first chance of the night came very early on, with barely three minutes played. Álvaro Morata collected the ball on the edge of the area and he turned Martín Mantovani, before unleashing a left-footed strike which flew just inches wide of the hosts' goal. This was just a foretaste of the onslaught that was to follow. Marco Asensio it was who got things started when he nipped in to steal possession in the middle of the park on 15', leaving two opponents in his wake, before laying the ball to James, who was left to tap home.

Morata's goals
Madrid had done the hard part by getting their noses in front, but the Whites were not content to sit on their lead and before the halfway stage of the first period they extend their advantage by a further two goals, with Morata bagging a brace. His first of the night came from a corner immediately after Danilo's effort from the edge of the box had brushed the upright. James swung in a delivery on 18' and Nacho glanced the ball on to Morata, who was on hand at the far post to nod the ball home with a perfect header back across goal. Morata's second and Madrid's third came five minutes later when a fine counter-attack, led by Mateo Kovacic, culminated in the forward firing home after a sublime assist from the Croatian.

The leaders seemed to have the match under control, but Leganés reacted and scored two goals before the break. Gabriel Pires turned the ball home after a cut-back from Diego Rico in the 32nd minute and Luciano struck from a corner two minutes later to further reduce the arrears. There were two further chances, for Lucas Vázquez in the 39th and Danilo in the 42nd minutes at the close of an exciting first half.

Intelligent
The second period started as the first had ended with Real Madrid extending their lead in the 49th minute. A James free-kick picked out Morata and his headed effort ended up in the back of the net with the assistance of Mantovani. The league leaders could have got a fifth with chances falling to Kovacic on 51' and Lucas Vázquez on 53', but Iago Herrerín came out on top on both occasions .

As the game went on, the visitors took control of the game, aware of the derby coming up against Atletico. There were few chances until a spectacular bit of individual play from Lucas Vazquez in the final minute in which he got past two opponents and was only denied by a great intervention from Herrerín in the one-on-one, preventing what would have been one of the goals of the day. The leaders now turn their attentions to their next game against Atletico. 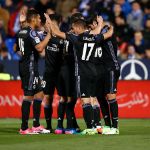