"I wish I could play two hundred more, win lots of titles and bring lots of joy to our fans" said the Croatian.
Luka Modric made his 200th appearance for Real Madrid and after the game, Florentino Pérez presented him with a commemorative shirt to celebrate the milestone. The Whites' midfielder reaches this landmark in his fifth season at the club, during which time he has been involved in 140 wins and scored 11 goals.

The Croatian expressed his pride at having made such a number of appearances: "It means a lot to me. I’m very happy and proud to be part of this great club. I wish I could play 200 more, win lots of titles and give our fans a lot of joy. I believe that I've improved a lot as a player and a person, because being surrounded by great players on a daily basis helps your development out on the pitch. I'm pleased and now have to keep giving my all for Real Madrid".

"Betis sat back very deep and played with five defenders, which meant that we had to be patient and we were. Ultimately we've picked up three very important points to go back top. Our destiny is in our own hands, we've got a game in hand and that's important for our confidence as we go into our next games".

Modric's 200 appearances have come in the following six competitions: LaLiga (131), Champions League (46), Copa del Rey (16), Spanish Super Cup (three), Club World Cup (two) and the European Super Cup (two). The season in which he played the most games was the 2012-13 campaign, in which he racked up 53 appearances. So far this term, Modric has scored one goal in the 27 matches he's been involved in, with 20 of the games resulting in victories. 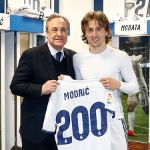