Cristiano Ronaldo, Sergio Ramos, Marcelo, Bale and Benzema posed for photo with the plane which features a new vinyl sticker of the Whites.
Cristiano Ronaldo, Sergio Ramos, Marcelo, Bale and Benzema attended the presentation of the new Real Madrid vinyl sticker on the Emirates A380. The plane made its debut at the Adolfo Suárez Madrid-Barajas airport and is covered with a giant image of the players. Its impressive design can be seen from all sides of the plane, as the vinyl sticker covers over 500 square metres.

As well as the Spanish capital, the Real Madrid A380 will visit the majority of destinations that Emirates serves around the world, giving Real Madrid fans the opportunity to take a photo with the aeroplane. This also includes the United States, the same country that the team will be visiting this summer. 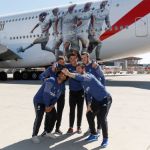