Cristiano Ronaldo netted twice and Isco struck the opener for the hosts, who trailed 3-1 with five minutes remaining.
Santiago Bernabéu

3
Real Madrid struck late to rescue a point against Las Palmas. The Whites, who were earlier reduced to 10 men, were 3-1 down with 85 minutes played, but claimed a share of the spoils courtesy of a Cristiano Ronaldo double in a game that was played at a frantic pace right from the off. Indeed, within the first 10 minutes both sides had already scored. Real Madrid drew first blood, when on 8 minutes Kovacic played a sublime threaded through ball to Isco, who finished with real aplomb when clean through. However, the hosts' joy was short-lived, with the visitors restoring parity in the very next move after some fine play from Tana culminated in his powerful driven effort from inside the area flying into the back of the net.

The two sides continued to serve up a thrilling spectacle and on the 30-minute mark, the islanders had the chance to have got their noses in front. A great bit of individual play from Jesé left Boateng with just Navas to beat, but he contrived to fire his effort over the bar. Two minutes later, Aythami got on the end of a corner but his header was kept out by Ramos. Real Madrid hit back and could have scored in injury time. An inviting centre from Cristiano Ronaldo flashed right across the box and just as Morata was about to pounce from point-blank range, Lemos stepped in to put the ball behind for a corner.

Things took a turn for the worse at the start of the second half as Bale was dismissed in the 47th minute and Jonathan Viera scored a penalty on 55' after a Ramos handball in the box. Things got even more complicated for the Whites as the visitors scored yet another goal. This time it was Boateng who struck. Real Madrid now had to turn the game around with 10 men and they came close in the 61st minute, but Ramos’ header came back off the post.

Chances
Morata found the back of the net for Real Madrid in the 69th minute, but Fernández Borbalán ruled the goal offside due to the positioning of Cristiano Ronaldo, who was in fact onside. The Whites, with 10 men, took the game to the visitors and had chances to score. Benzema took a shot, following a pull-back from Lucas Vázquez in the 74th minute, but his shot went over the bar. Two minutes later it was the youth-team graduate who could have scored, his shot forcing Javi Varas to prove his mettle. 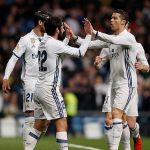