A Benzema double and strikes from James and Asensio hand the Whites the win at Ipurua.
Ipurua

4
Real Madrid clinched an important win over Éibar at Ipurua just three days ahead of the second leg of their last-sixteen Champions League tie against Napoli. The Whites ran riot as Benzema was the standout player and they had the game essentially wrapped up within half an hour. Indeed, they were in front inside the first fifteen minutes when Asensio sent in a cross which zipped across the area, and an off-balance Benzema was on hand to get the better of Luna on 14 minutes and release a shot. Yoel blocked the initial shot but the Frenchman poked in at the second attempt.

Just one minute later and they had the chance to make it 2-0. James ran to the by-line and surprised everyone when he unleashed a drive with the outside of his boot which forced the goalkeeper into a fine stop, before he was helped by Dos Santos who cleared the ball off the line. They couldn't manage the same again with 25 minutes gone though, as the Colombian was once more at the centre of a fine move. His sumptuous free-kick was crossed into the box, and a subtle touch from Benzema helped it on the way into the net. A double from the Frenchman and 0-2.

The Benzema - James connection
The match was going well in the Whites' favour and it was sealed just on the half-hour mark. It was a change of roles in regards to the second goal as this time Benzema crossed for James, who caught out the defence as he flung himself at the ball from nowhere to turn home. The connection between Benzema and James was proving crucial. The scores remained unchanged going into the break, despite the fact Enrich had a point-blank effort that was sent out for a corner by Ramos in the 38th minute, before six minutes later, Benzema and Asensio could have added another following fine individual play from the Frenchman.

Benzema was the on-form man and at the beginning of the second half he had a chance to get his hat-trick, but his left-footed shot in the 48th minute wasn’t enough to add to his tally.

Fourth goal
Every time the Frenchman was on the ball the side looked dangerous and in the 60th minute his left-footed pass between the lines found Asensio in space. The Spaniard set up James whose shot hit the post with the rebound falling to Asensio, who made no mistake in making it four.

Éibar got one back in the 72nd minute through Peña but it was a convincing performance from the Whites at Ipurua to add three more valuable points in the fight for the League title. 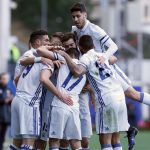