Two Sergio Ramos goals and another from Morata sealed the win for Real Madrid at the Stadio San Paolo, which sees them into the next round.
San Paolo

3
They had to dig in at times at the Stadio San Paolo, particularly in the first half, but Real Madrid are safely awaiting their opponents in the Champions League quarter-finals after a stunning second-half performance and a Sergio Ramos double saw them come through a tough tie. Despite holding a 3-1 advantage from the first leg, it was no easy task facing the madridistas, and that hit home in a tough opening period. Napoli's suffocating pressure and desire saw them pose a serious threat, and they would head in at half-time in the lead.

The hosts' goal arrived in the 24th minute when Insigne linked with Marek Hamšík, who fed Dries Mertens to beat Keylor Navas in a one-on-one. Real Madrid wasted no time in responding though, and a slide-rule Benzema pass sent Cristiano Ronaldo through. He got the better of Pepe Reina with a fine touch, but he was off balance as he crashed his shot against the post in the 29th minute.

Chances
Just as the Whites had come close to levelling the game, the Italians had an equally fine opportunity to increase the deficit just eight minutes later. The ball fell to Mertens, who found himself with space in the area, but he could only find the post with his strike and the sides made their way in for half-time with the score at 1-0.

Real Madrid came out with renewed impetus after the half-time interval and Karim Benzema fired in a warning shot on 47', when his volleyed effort narrowly missed the target. Madrid were however not to be denied four minutes later when Sergio Ramos claimed his first goal of the night. Toni Kroos swung in a corner and the Whites' skipper stole a march on everyone to glance the ball home.

Ramos at the double
Six minutes later the very same architects were involved as Madrid struck again. The German whipped a corner over, this time from the right, and Ramos once again leapt highest to meet the ball, which struck Merten's head and flew past Pepe Reina in the hosts' goal. The score was now 2-1 to the visitors and the tie was all but over thanks to Ramos' brace, which evoked memories of the double he scored in Munich en route to the Décima.

Morata hits the third
Dani Carvajal came close to making it 3-1 to Madrid on 83' after a fine piece of individual play, which saw him chip the ball over a defender's head, only for him to send his shot over the bar. The visitors' third of the night did duly come in injury time.  Reina managed to parry away Cristiano Ronaldo's strike, but the onrushing Álvaro Morata pounced to stroke the ball home. The Whites will now have to wait until Friday 17 March to learn their fate in the quarter-final draw. 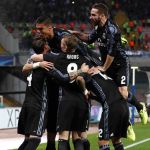