“This book serves as a tribute to all those who have given their heart and soul for this aim, and to all madridistas all around the world who have been able to share in it”, explained Florentino Pérez.
The Real Madrid Foundation presented the book on La Undécima, UEFA Super Cup & Club World Cup in the presidential box at the Santiago Bernabéu. At the presentation of the book, written by Enrique Ortego, club president Florentino Pérez was joined by José Creuheras, president of the Planeta group and Atresmedia; Ana Rosa Semprún, Director General of Espasa; Paco Gento, honorary president of Real Madrid, and Sergio Ramos, Marcelo, Nacho, Lucas Vázquez and Keylor Navas, representing the football team. The Undécima trophy and jersey were on show during the act.

Florentino Pérez was the first to speak: "Since it's creation 61 years ago, the European Cup and Real Madrid have been part of a passionate story. For this club, every win in this competition brings pure emotion. It is an emotion that us football fans experience with devotion. For that reason, today is truly special to us”.

The dream of la Undécima
“The presentation of this book serves as a tribute to all those who have given their heart and soul for this aim, and to all madridistas all around the world who have been able to share in it. La Undécima has once again shown that it is the culmination of a common dream. This is the tenth book in an extraordinary collection, which shows the importance of Real Madrid through its symbols most important moments”.

The relationship with the European Cup
“This book reflects our genetics, sand it is only through this that we can explain our particular alliance with the European Cup, which we share with all followers across every continent. La Undécima thrilled us all but it also stands as a stepping stone towards the challenge of la Duodécima, a challenge which has already born fruits, with the UEFA Super Cup and another Club World Cup. In this book, we relive our third international treble crown”.

“This group of professionals that is the first team understand exactly what this badge and shirt mean. When few people believe in this team, its spirit to overcome and to sacrifice allows the team to fight until the end, never giving up and at last achieving glory once again. This was also made possible thanks to the boost out fans gave us in the San Siro”.

Semprún: “It is an honour to be associated with Real Madrid”
“On behalf of Espasa, it is an honour to have our name associated with Real Madrid. It also seems like a natural union between the best club in the world and the oldest editorial in the Spanish language. Books like this are the best way to commemorate the iconic feeling of victory, with which you can measure the glory of a great club”.

Exhibition
In addition to the presentation of the book, the presidential box held an exhibition at the Real Madrid Historical Heritage Centre where visitors could look at the other 10 European Cups, jerseys and other commemorative objects from these finals. In addition to Gento, former players such as Amancio, Antonio Ruiz and Pachín were in attendance. 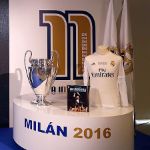