The Captain reached this milestone in the game against Osasuna.
Sergio Ramos made his 500th official appearance with Real Madrid in Pamplona. On September 8th 2005, The man from Seville was presented as a Real Madrid player in the presidential box at the Santiago Bernabéu, accompanied by club president Florentino Pérez and Alfredo Di Stéfano. He was 19 years old. Since then, his quality, character and charisma have helped to make him a legend as the madridista captain, as well as becoming the scorer of decisive goals in recent seasons.

The goals he scored in the finals of la Décima and la Undécima will also remain in the minds of our fans along with his brace at the Olympic Stadium in Munich, his goal in the first Club World Cup final, the last UEFA Super Cup or those that he scored in extremis against Barcelona and Deportivo in this LaLiga campaign. 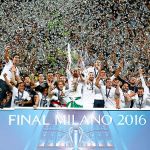