Real Madrid failed to put points on the board in the first of their two rearranged LaLiga fixtures.
Mestalla

1
Despite dominating proceedings, Real Madrid succumbed to defeat at Mestalla. The opening exchanges proved to be the undoing of the league leaders, who found themselves two goals down with less than 10 minutes on the clock. Simone Zaza brought the ball down with his back to goal in the 5th minute and unleashed a shot on the turn which flew past the helpless Keylor Navas. The visitors were to suffer another setback just four minutes later, when Fabián Orellana doubled the hosts' advantage.

Real Madrid would have to mount a comeback and they had the chance to halve the deficit on the 15-minute mark. Cristiano Ronaldo controlled the ball in the area, before earning himself a yard with a step over and unleashing a shot. The ball danced on the goalline and an off-balance James got an effort in on goal, but Munir managed to clear the ball off the line. The Whites continued to pour forward, and Diego Alves had to be at his best to keep out a Karim Benzema shot from the edge of the area in the 21st minute.

The game had turned into an end-to-end affair. A Dani Parejo free-kick was kept out by an excellent diving save from Keylor Navas on 30' and nine minutes later the visitors carved out a chance of their own. Dani Carvajal shaped in a cross and the hosts' custodian grasped the ball in after Cristiano Ronaldo produced an improvised back-heeled effort. The Portuguese forward was in the thick of the action and he duly reduced the arrears before the break. Marcelo crossed the ball over and Ronaldo stole a march on the Valencia backline to nod home on 44'.

The second half started with Valencia pinned back, as Real Madrid continued to pressure high up and win the ball back quickly. The madridistas were doing everything they could to level things and they came close to doing just that in the 52nd minute through a fine Marcelo strike, but Diego Alves gathered the ball at the second attempt.

The draw just wasn’t to be
Gareth Bale came on to replace James 10 minutes later and the Whites kept probing search of an equaliser. They came close again with 85 minutes on the clock when Lucas Vázquez, who had come on for Modric moments earlier, saw his cross-come-shot fly inches past the post. Sergio Ramos then had a volleyed chance in the 89th minute but he just failed to find the net, and Real Madrid were paying the price for their lack of cutting edge. That was reflected in the final chance of the game, as Marcelo crossed for Cristiano Ronaldo, whose headed effort scraped the crossbar on its way over. 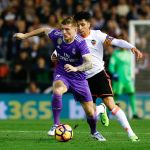