The Welshman marked his comeback with the Whites' second goal, which secured a Real Madrid victory over Espanyol.
Santiago Bernabéu

0
Just three days after their Champions League win over Napoli, Real Madrid clinched three more important points at the Bernabéu to maintain their lead at the top of LaLiga, despite having two games in hand. Zidane made seven changes to Wednesday's starting eleven, in yet another exhibition of the fact that the whole squad will have a role to play over the course of the season, as he kept the team's other commitments in mind for the week ahead.

It was two of the new faces in the line-up who combined for the only goal of the first half. Isco found a precise pass with 33 minutes gone and Morata sent the ball into the back of the net with a fine header. It was the last move of note in a first half which saw Espanyol pose very little threat, while the hosts could have gone ahead on more than one occasion.

Chances
Kroos sent in a corner with just 12 on the clock and Pepe's headed effort flew inches past the post. Cristiano Ronaldo also had a good opportunity following fine play by Lucas Vázquez to win the ball back and find a lovely pass in the 30th minute but Óscar Duarte was on the goal line to save his team.

The second half was livelier as Espanyol went in search of an equaliser. A Hernán Pérez shot in the 61st minute was sent behind for a corner by Casilla. Eight minutes later Real Madrid almost extended their lead but a Cristiano Ronaldo header went over the bar.

Bale back in style
Zidane then decided to bring on Bale in place of Alvaro Morata. The Welshman made his comeback after picking up an injury in Lisbon on the 22nd of November. The Whites continued to attack and in the 78th minute, Kroos saw Lucas Vázquez unmarked and picked him out with a great pass, but the winger’s volley hit the side netting.

The second goal came after a quick counterattack. Isco played the ball in behind the defence and Bale made no mistake in the one-on-one with Diego Lopez. Two assists by the midfielder from Malaga as the league leaders maintain their advantage at the top of the table. The team travels to Mestalla on Wednesday, where they can extend their lead on the chasing pack in the rescheduled fixture against Valencia. 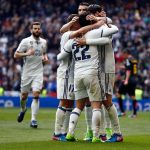