Last year saw him win the Champions League, the Club World Cup, the European Championship and the Ballon d'Or.

Cristiano Ronaldo became the inaugural winner of the first-ever FIFA Best Men's Player award, as the Whites forward claimed yet another distinction in what was an excellent 2016. The madridista came out on top in the voting, which featured a panel of national team captains and coaches, internet users and over 200 experts journalists from around the globe. The Portuguese striker drew 34.54% of the vote, with Lionel Messi pulling in 26.42% and Antoine Griezmann 7.53%.

The award of the The Best crown saw Ronaldo add a further accolade to the array of individual distinctions he received during 2016, the pick of which were his fourth Ballon d'Or and the UEFA Best European Player award. Meanwhile, with Real Madrid he lifted La Undécima, the UEFA Super Cup and the Club World Cup, whilst he was instrumental as Portugal secured their first-ever European Championship title.

The FIFA awards ceremony, which was held in Zurich (Switzerland), also saw the striker named in the FIFA FIFPro World11. His inclusion in the side means that Cristiano Ronaldo has now taken his place in the star-studded line-up for a 10th successive year, having made the cut every season since joing the Whites.

A further four madridistas joined Cristiano Ronaldo in the World XI: Ramos, Marcelo, Kroos and Modric. The quintet were congratulated by their teammates the day after the ceremony before training at Real Madrid City. The Best Men's Coach 2016 accolade was also handed out at the gala, with Zinedine Zidane finishing in second place behind Claudio Ranieri. 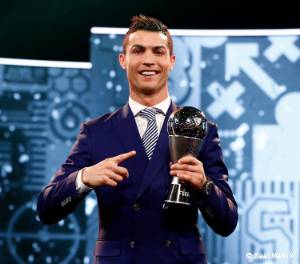