Kopa, Zidane, Ronaldo, Figo and Owen accompanied the forward onto the pitch, as he received the award from Paco Gento.
The Santiago Bernabéu shone with gold as the fans welcomed Cristiano Ronaldo. In his first home match since winning the Ballon d'Or, The Portuguese shared his award with Real Madrid fans, displaying the trophy in front of the crowd before the game against Granada. The home fans paid tribute to the best player in the world by holding up golden cards to form a mosaic and they welcomed him with a roaring ovation.

Cristiano Ronaldo was accompanied by other Real Madrid legends who have won the Ballon d'Or. Kopa, Ronaldo, Zidane, Figo and Owen joined the Portuguese on the pitch at the Bernabéu, whilst on the big screen messages of congratulations from both Kaká and Cannavaro were shown. Paco Gento, honorary President of Real Madrid, gave the Ballon d'Or award to Cristiano and the Portuguese striker shared it with the fans in the Bernabéu before posing with the four trophies that he has now won. 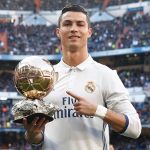