Two goals from the captain clinch victory for Real Madrid, who sit top at the halfway stage.
Santiago Bernabéu

1
Real Madrid clinched three important points against Málaga at the Bernabéu to sit top of the LaLiga table at the halfway point of the season. The Whites took their time in going in front, despite creating several clear-cut chances to score within the first fifteen minutes. With 11 on the clock, Lucas Vázquez crossed for Benzema, who met it with his head, but the ball flew inches over the bar. Just a minute later, and Cristiano Ronaldo was through one-on-one with Kameni following a sumptuous pass from Kroos, but the Cameroonian shot stopper came out on top.

Málaga had their chances too, but Chory Castro's right-footed strike with 16 minutes gone came back off the post, and Camacho's headed effort on the half-hour mark narrowly missed the madridista goal. From then on, it was a question of the Ramos-Kroos partnership coming to the fore, and two set-piece goals turned the tie in the Whites' favour before the sides headed in at the break.

Ramos double
The first came from a 35th minute corner that was met with a towering header from the captain, and the second from a free-kick which saw him catch everyone unawares on 43 minutes to poke home past Kameni with his right foot. There was even the chance of a third goal before half time, when Mikel crashed the ball against his own crossbar as he tried to clear.

Madrid looked to be well on course for victory, but things took a turn for the worse in the 63rd minute. A fine piece of individual play from Juankar saw him bear down on Keylor Navas and whilst the goalkeeper parried his effort, the ball fell to the feet of Juanpi, who fired home. The Andalusians had halved the deficit and in the next move the Madrid custodian prevented the visitors from restoring parity when he kept out a Chory Castro effort from within the six-yard box.

Cristiano Ronaldo hits the post
It was time for the hosts to step up and Zidane's charges nearly regained their two-goal advantage with what would have been a somewhat fortunate goal. Mikel played the ball back to Kameni, who failed to bring the ball under control but managed to get back to produce a goalline clearance. However, his clearance was seized upon by Cristiano Ronaldo, who ultimately failed to get the better of the Málaga shotstopper in the one-on-one. A minute later, the Portuguese striker had another opportunity, with the post foiling him this time.

Ronaldo was in the thick of the action in the closing stages and he was heavily involved again on 81' when Kameni turned his effort from the angle away and Mikel subsequently cleared the ball off the line. The madridistas looked solid as they went on to see the game out whilst barely affording the visitors any chances 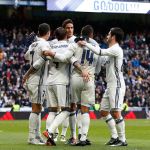