The team kicks off its participation in the Club World Cup in Yokohama on Thursday.
Real Madrid are currently flying out to Japan to take part in the FIFA Club World Cup, with their first clash coming on Thursday 15 December. Just hours after securing top spot in LaLiga, following victory over Deportivo, the Whites' expedition, led by president Florentino Pérez, departed from the Adolfo Suárez Madrid-Barajas airport headed for Tokyo Haneda. Their estimated arrival time is around 9:00pm (on Monday the 12th, 5:00am local time). The team will be based in Yokohama, which is where they play their two matches in the competition - the first of which is the semi-final clash this Thursday (11:30am CET). 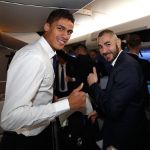