Florentino Perez greeted the presidents of the Mexican team, José Romano and Ricardo Peláez, at the Royal Park Yokohama Hotel.
President Florentino Pérez greeted José Romano, Operating President, and Ricardo Peláez, Sporting President, at the Royal Park Yokohama Hotel, where the team are based in the Japanese city. Also present at the meeting were Pedro López, third vice-president of Real Madrid, and Emilio Butragueño, director of Institutional Relations. All of them wished each other luck ahead of the semi-final that will be played today (11:30am CET, 7:30pm local time).

At the hotel, Florentino Pérez greeted the Madrid fans who were present, he also signed autographs and had his photograph taken with the supporters. 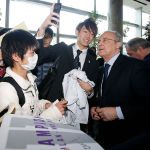