“Our team will put their heart and soul into the final and they'll do it for you”, stated the Real Madrid president.
Real Madrid's presence in Japan has unleashed the passion of the legions of fans in the Asian country. Madridismo transcends borders and that was yet again demonstrated at the meeting of supporters clubs which took place at the Instituto Cervantes in Tokyo. Florentino Pérez headed an event which was attended by a hundred members of the Nipona Madridista Fan Club, as well as other clubs from Spain, Morocco and Kuwait.

The Real Madrid president had this to say: “We've won La Undécima, the European Super Cup, and now we're eager to round it off with the title of world champions here in Japan. It would be third time Real Madrid have won a triple international crown in the same year”.

“Our team will put their heart and soul into the final tomorrow and they'll do it for you. For all our supporters, for all the madridistas who are thrilled by and suffer for the club's colours”.

Unity
“La Undécima, just like all the titles we've claimed over the course of our history, was won in Milan, together and united. That is our strength. We can see that unity is visible here today through our Nipona supporters club and all those who have come to be close to their team, from Spain and all other corners of the globe. Your support and encouragement are fundamental in realising the dreams of millions of madridistas”.

At the end of the event, Florentino Pérez presented a jersey signed by the team to Antonio Gil de Carrasco, director of the Instituto Cervantes in Tokyo, and another to Shigeki Kubota, the president of the Madridista Supporters Club of Nipona. 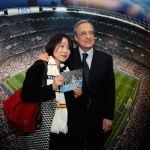