Real Madrid made history once more, this time in Japan, when they became the first ever five-time world champions. In achieving the feat, the madridistas overcame Club América (Mexico) and Kashima Antlers (Japan) in the 2016 tournament. The Whites' now have two Club World Cups, which they can add to their three Intercontinental Cups.

Benzema and Cristiano Ronaldo shared the team's six goals at the tournament and the Portuguese player was presented with the competition's Golden Ball and chosen as the best player in the final. Luka Modric also played a starring role and was handed the Silver Ball at the Club World Cup.

In the final against Kashima Antlers, Benzema opened the scoring but the Japanese side turned the game around, striking once just before the break and then again following the restart. Cristiano Ronaldo converted a penalty to take the game into extra-time, and was then decisive, with two further goals to clinch the title. The hat-trick was the perfect way for the Portuguese man to round off a hugely successful year both collectively and individually.

It was Sergio Ramos who lifted the trophy during the on-pitch celebrations at the International Stadium Yokohama. Zidane expressed his satisfaction at winning the title: “We knew it was going to be difficult but a big title is always enjoyable”. The players also discussed this fantastic end to 2016 and the madridista title triumph was covered by the press all over the world.

Semi-final
Prior to the final, Real Madrid played against Club América at the same stadium. The madridistas ran out 0-2 winners in their first clash, thanks to goals from Benzema and Cristiano Ronaldo. Modric was voted man of the match in the clash. 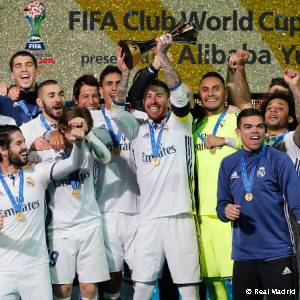