Goals from Morata, Mariano and the captain give the league leaders the win over Deportivo in the last clash of the year at the Bernabéu.
Santiago Bernabéu

2
Real Madrid have done it again, and yet again it was Sergio Ramos who stepped up at the crucial moment. At 2-2 and into the 92nd minute, another headed goal born of their captain's belief sealed the win for the league leaders in the last game of the year at the Bernabéu. A thrilling night of football and another example of courage, commitment and fighting spirit from the madridistas.

The first half ended goalless, but due only to the wastefulness in front of goal from both teams. The Whites dominated possession from beginning to end but clear-cut chances were evenly split, with two apiece. The first came for Ramos, who struck a free-kick from the edge of the area won by Casemiro on 26 minutes, but his effort flew inches over the bar. Deportivo responded just a minute later, but Navas produced a superb save from Borges' strike following a cross from Albentosa.

Clear-cut chances
The most dangerous opportunities were still to come. James went through up against Tyton in the 29th minute but the goalkeeper came out on top and avoided the goal with a great stop. Deportivo reacted once more, but six minutes later Borges could only find the post with his headed effort from a free-kick out wide. That moment brought Real Madrid to life and saw them pin their opponents back during the closing stages of the first half.

The second half got off to a very different start, as the Whites applied the high press and prevented Deportivo from playing out from the back. The hosts' efforts were duly rewarded in the 50th minute when Álvaro Morata collected the ball with his back to goal and earned a yard of space, before catching Tyton off guard with a thumping right-footed strike that flew past the powerless Depor custodian.

Deportivo turn the game on its head
It was a stunning strike from the youth-team graduate and it appeared as if the league leaders had done the hard work by getting their noses in front. However, their joy was short-lived as Joselu produced a thunderous left-footed finish to restore parity. It was a case of as you were with little under 30 minutes remaining. Just two minutes later, Madrid's task became all the more difficult when Joselu outfoxed Keylor Navas in a one-on-one to put the visitors into the driving seat.

Comeback
From that moment on and as the club's DNA dictates, the madridistas laid siege to the Deportivo goal and their probing bore its fruits on 84'. Mariano rose highest to meet Lucas Vázquez's left-footed centre to flick the ball home with his shoulder to level things up. However, the hosts weren't done just yet and with 92 minutes on the clock, they completed the comeback. Toni Kroos whipped in a corner and there was Sergio Ramos to power home a trademark header to seal victory for the league leaders. Real Madrid sign off for the year at the Bernabéu sitting top of the tree and boasting a 35-game unbeaten run. Next up it's the Club World Cup. 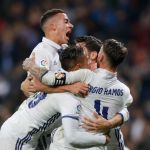