Goals from the Frenchman and the Ballon d'Or winner proved decisive against Club América and the Whites will go head-to-head with Kashima Antlers for the title.
International Stadium Yokohama

2
Real Madrid beat Club América and are now in the Club World Cup final, which will see them face Kashima Antlers in Yokohama this Sunday. The Whites, who have now gone 36 games undefeated, broke the Mexican team's unbeaten record (which was 16 games) in a semi-final that was first set alight by Benzema and later put to rest by Cristiano Ronaldo.

The first goal took a while to come, despite Real Madrid deserving a goal sooner. A measured cross from Lucas Vázquez on 26’ was met by Cristiano Ronaldo, but his header hit the post. The European championions continued to pour forward and Ballon d’Or winner came close to breaking the deadlock. He took a free-kick in the 33rd minute, the ball hit the crossbar and on the rebound, he volleyed spectacularly with his left, forcing Muñoz to prove his mettle.

Exquisite finish
The Mexican team's goalkeeper could do nothing in added time however, as the Whites finally reaped their rewards. Madrid went ahead before the break thanks to a sensational assist from Kroos on the edge of the box, finished off by Benzema's sublime shot with the outside of his right foot.

Just 10 minutes into the second half, La Volpe decided to change his system, taking out one of his five defenders in order to strengthen the midfield. Real Madrid tried to take advantage of this by breaking on the counter, which nearly saw them double their advantage in the 61st minute. Lucas Vázquez pulled the ball back but Goltz managed to stop Cristiano Ronaldo's effort in the six-yard box.

Unbeaten
Real Madrid had the game under control and were looking better in front of goal than their rivals. A terrific cross from Lucas Vázquez in the 66th minute found Cristiano Ronaldo alone in the six-yard box, but he was unable to convert his headed effort. Modric also has the chance to score just eight minutes later but his shot from the edge of the box ended up in the hands of Muñoz. Morata also came close to killing the game off. His shot in the 89th minute went just inches wide of the goal.

Cristiano Ronaldo decides it
Real Madrid did not look troubled and were able to put the game to bed in added time. James passed between the lines to Cristiano Ronaldo, who shot across goal, beating the América goalkeeper in the one-on-one. Real Madrid are now in the final of the Club World Cup, where the Japanese side Kashima Antlers await. 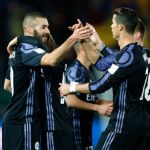