Nacho and Lucas Vázquez took centre stage at the launch event of the new Adidas boots.
Lucas Vázquez and Nacho were in attendance at an event held to launch a new range of Adidas boots, at which the two madridistas reflected on the latest news from within the Real Madrid camp. The striker had the following to say ahead of the game against Barcelona: "We go into it in very good form, we're top of the table and are in very good shape. We're very confident and are raring to claim the three points".

"We're in a good position, but there are still over 20 matchdays to go. As a team, we have to continue on in the same vein as we look to extend our unbeaten run. Let's hope that we pick up a good result at the Camp Nou. We've raring to go and are really confident. If we win it'll see us take a major step towards the LaLiga title, but it's the most consistent side that wins the league and not whoever comes out on top in the Barça v Madrid game. We're on the right track, but we've got to keep going and look to win more games".

Praise for Zidane
"His major strength is in the way he works day in, day out and the close relationship he has with his players. With him being a former player himself, he knows exactly what it's all about. He brings the best out of each of us and that's beneficial to the team and we see that out on the pitch every weekend".

Supporters' affection
"We've got brilliant fans who offer the whole team their support. I'm really grateful for their backing and I want to return their affection with hard work and wins".

Targets
"At Real Madrid there are big demands and the dressing room is aware that the aim is to win everything going. We've got the Club World Cup coming up and it's our short-term objective and then we'll be gunning for the other three competitions. We all want to win them and that's what we'll be trying to do. The gaffer knows how to manage his squad and going 31 games unbeaten can only be achieved if you've got a great group of players and we've got the best squad in the world, with really top players".

"The gaffer has managed to mould us into a united ground. We all feel valued and that's essential for the players. The only thing we're interested in is extending the winning run for as long as possible".

Memories of last year's win
"It was very special. Whenever you win away to Barcelona it's always a source of joy. We weren't doing well at the time and winning there gave us a lot of confidence".

Chemistry with Zidane
"The coach has had a major role in the winning run. The players have formed a good group and I think that this is the best side we've had in many years".

Personal form
"I'm perhaps enjoying my best period right now. I'm getting regular minutes and fitness-wise, I feel strong and very good and things are going well for me".

Champions League
"It's tough to win the Champions League and all the more so to win it twice in a row. We're not obsessed by it and we just have to take things step by step. We've got a very important game against Borussia coming up and our aim is to win that one and finish top of the group. I vow to shave my beard if we win a second Champions League". 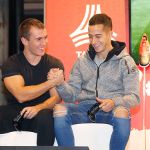