The Brazilian has made 372 appearances for the Whites, winning, amongst others, two Champions League titles during this period.
Today marks the 10th anniversary of Marcelo's arrival at Real Madrid. The Brazilian wing-back was unveiled on 15 November 2006, arriving in the Spanish capital shortly after having celebrated his 18th birthday. Since then, he has gradually amassed experience within a squad of which he is currently the vice-captain, whilst also gaining the affection of the Madrid faithful, for whom he's an idol. His statistics speak for themselves in terms of his importance within the squad: 372 competitive appearances which have yielded 26 goals, despite his status as a defender.

Marcelo has lifted every single title going during his time as a madridista. His honours include the following 12 trophies: two Champions League crowns, one Club World Cup title, two UEFA Super Cups, three Liga titles, two Copa del Rey crowns and two Spanish Super Cups. Before 2016 is out he'll be bidding to add another piece of silverware to this list in the form of his second Club World Cup title. 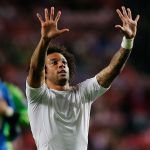