Real Madrid picked up three more points ahead of El Clásico to extend their unbeaten run to 31 games.
Santiago Bernabéu

1
Real Madrid saw off Sporting to claim their third win in just seven days. The Whites, who are riding a 31-game unbeaten run, prevailed here to tigthen their grip at the summit of LaLiga and put their closest pursuers, Barcelona, under pressure, with the prospect of Madrid's advantage at the top being further increased should Barcelona fail to win at Anoeta.

Following an early scare which saw Sporting's Carmona spurn a chance when clean through on Keylor Navas on three minutes, the Whites soon got their noses in front. Just a minute later, Lucas Vázquez was felled in the area and Cristiano Ronaldo made no mistake from the spot. The afternoon couldn't have got off to a better start for the league leaders, who went on to double their lead just after the 15-minute mark. A fine left-footed centre from Nacho was met by a diving header from Cristiano Ronaldo as the Portuguese forward netted his second of the game with just 18 minutes on the clock.

Chances
The rain played even more of a key part and complicated the game in terms of moving the ball around. Despite that, the Whites continued to heap on the pressure. A marvellous cross in from Lucas Vázquez in the 58’ which Benzema latched onto with his head forced Mariño to again prove his mettle. Nacho also had an attempt three minutes later following a piece of individual skill out on the left wing, but his left-footed shot went wide of the visitors’ goal.

Cop misses his penalty
The minutes went by and Zidane decided to shuffle his pack, with Asensio and Marcelo entering the fray on 71' in place of James and Ramos. Everything could have become a lot more complicated seven minutes later. Víctor Rodríguez went down in the box after a tackle from Nacho. Cop took the penalty but he fired his penalty wide of the upright. Everything remained the same after that although Cristiano Ronaldo had the chance to put the game to bed in the 87’ with a shot that Mariño did well to save. 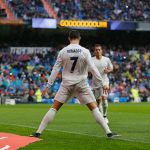