The Frenchman's header and Varane's opener handed Madrid victory over Sporting CP and the Whites now play for top spot against Borussia at the Bernabéu.
José Alvalade

2
Real Madrid got the job done in Lisbon, as the Whites overcome Sporting CP to qualify for the Champions League last 16. Madrid will now contest top spot in Group F against Borussia Dortmund at the Santiago Bernabéu in the final group game. Should they prevail, the Whites will have achieved their objective and qualify as group leaders.

The first half was an evenly-fought contest in which Real Madrid enjoyed the lion's share of possession, whilst Sporting showed themselves to be a well- organised outfit. Gareth Bale and Cristiano Ronaldo were both heavily involved in the action and a 29th-minute free-kick from the right flank saw the Portuguese forward have a hand in tipping the game in the visitors' favour. Luka Modric swung the ball across and whilst Ronaldo failed to connect properly on the half volley from the penalty spot, Raphael Varane was quickest to react, firing the ball past Rui Patricio with a left-footed finish to break the deadlock.

The Whites were now in front, although their advantage could have been cancelled out just three minutes later. Some individual work from Gelson Martins saw him play in Bruno César whose dangerous shot was cleared for a corner by Ramos. Bruno Caesar was involved again in the 41st minute, his free kick went just inches wide of Keylor Navas's goal. The last chance before the break also fell to the home side, but the Real Madrid goalkeeper was again on top form to keep out a shot from Adrien Silva.

Injured
The second half saw interruptions with Marcelo and Bale both receiving treatment on the pitch. The Welshman was unable to carry on forcing Zidane to bring on Asensio to replace him. Seven minutes later, Sporting were down to 10 men after violent conduct from João Pereira on Mateo Kovacic.

Benzema with the decider
The match was all square in the 80th minute the referee pointed to the spot after Coentrão handled inside the area. Adrien Silva converted the penalty, setting up an exciting final ten minutes where either side could have won. But it was Real Madrid who did it. Sergio Ramos’ cross in the 87th minute was met by the head of Benzema, his effort was unstoppable for Rui Patricio. Real Madrid have qualified for the last 16 and will fight for the top spot in the final matchday against Borussia Dortmund at the Bernabéu. 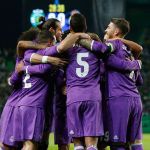