The Whites won the derby at the Calderón with three goals from the Portuguese and are now four points clear at the top of the league.
Vicente Calderón

3
Real Madrid won the derby, knocking the hosts' confidence at the Vicente Calderón and extending their lead at the top of LaLiga. The Whites now have a four point lead over Barcelona, who are second in the league. The madridistas' defensive solidity and Cristiano Ronaldo's spectacular performance as he scored three goals in the game, making him top scorer in the history of the derby with 18 goals, proved decisive in Real Madrid's win

The first half was played at breakneck speed, and Real Madrid were superior. The league leaders were far from under pressure in the Vicente Calderón, they played bravely and dominated possession. They moved the ball around from side to side and thanks to Isco, the chances soon started to appear. It was only Oblak’s inspired performance that stopped the Whites going ahead in the 12th minute, when Marcelo's cross was met by Cristiano Ronaldo, sending a header goalwards. The goalkeeper was able to prevent the scores going to 0-1 with a fantastic stretch to clear off the goal line.

Free-kick goal
The Whites kept plugging away and Modric took a shot from the edge of the box in the 21st minute. His left footed shot forced Oblak to prove his mettle yet again. The madridistas had already deserved a goal and it arrived just two minutes later. Cristiano Ronaldo took a long range free-kick, the ball took a deflection off the wall and surprised the Atlético stopper, who was left helpless this time. The league leaders had gone ahead and were close to putting away a second in the 31’. Isco made a pass between the lines and Ronaldo maneuvered spectacularly in the box, but his shot went tamely into the home keeper's hands.

Atlético came out with more intensity and pressured higher up in the first few minutes after the break, but Real Madrid came through the test, showing real discipline and impressive solidity. Only two long-range efforts from Carrasco on 48 minutes and Griezmann three minutes later troubled the league leaders, who were proving imperious in aerial battles.

The second goal
The Whites withstood their opponents’ spell of pressure well and they then began to see more of the ball and create chances. Isco struck a spectacular volley from the edge of the box on 68 minutes, but Oblak was more than equal to it. Three minutes later, the table toppers netted their second of the evening when Cristiano Ronaldo was brought down by Savic in the area, before stepping up to slot home the spot-kick. It was double for the Portuguese man which gave his team some breathing space.

His influence on the game wasn’t to end there, though. The forward delivered the killer blow as he rounded off an electric counter attack in the 77th minute to seal his hat-trick. Bale showed real pace to find space, and he laid the ball perfectly to Cristiano Ronaldo, who gratefully stroked it into the net to cap a perfect performance. Real Madrid extend their lead at the top of the table and now turn their attentions to Tuesday’s Champions League clash with Sporting CP in Lisbon. 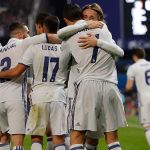