1
Real Madrid, who remain joint-top of Group F in the Champions League, once again banished any possible doubts about their credentials by overcoming Legia Warszawa to claim their second successive rout in three days. The game got off to a tricky start for the Whites, as Jodlowiec failed to outfox Navas on 9' when clean through and Odjidja's effort crashed back off the upright three minutes later.

Both of these chances spurred Real Madrid on and the hosts took the lead just after the quarter-hour mark.Gareth Bale picked the ball up outwide and cut inside Hlousek, before unleashing a fine curling effort which flew past the powerless Malarz and into the far corner. The Whites had made the breakthrough and it took them just three minutes to further extend their advantage. Karim Benzema spotted Marcelo's run before laying the ball into his path and the Brazilian let fly from the edge of the area. The flight of the ball was altered after it deflected off Jodlowiec, which left the Polish goalkeeper wrong footed.

It was a frenetic, end to end clash now and just 2 minutes later the Polish side pulled one back. Danilo upended Radovic in the area and the player stepped up to convert the penalty himself. With that there had been three goals in less than half an hour, but there was still more to come before the break. In the 37th minute, Cristiano Ronaldo received the ball on the penalty spot and laid it off to the arriving Marco Asensio, the midfielder did the rest, side-footing home first time for the third goal.

Lucas Vázquez’s first European goal
The second half started with much of the same. With neither side asserting dominance in possession, the first chance fell to Benzema. His volley in the 49th minute forced Malarz into a fine save but the goalkeeper couldn’t repeat the feat with 69 minutes on the clock when Morata fed Lucas Vázquez to volley home an exquisite fourth goal for the hosts which looked to have the game wrapped up.

Morata rounds off the goal fest
The madridistas showed no sign of letting up though, and Cristiano Ronaldo had two chances to notch goal number five. Benzema crossed and Ronaldo evaded his marker and stuck out a leg but he could only guide the ball inches wide of the visitors’ goal on 79 minutes. The two forwards would link up well again just three minutes later but the Portuguese man shot across goal when one-on-one with Malarz. The fifth goal did finally arrive after 84 minutes and Morata was the scorer, profiting from a fine assist by Ronaldo. The Whites have now scored 11 goals in the last two games. 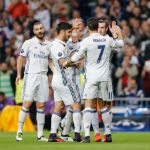