The Whites overturned Alavés' opening goal with three from the Portuguese forward and another from Morata.
Mendizorroza

4
Real Madrid claimed another three points at Mendizorroza in their quest for the La Liga title. The league leaders had to come from behind against a team who were yet to lose at home this season and it looked like being an uphill struggle almost straight from the off. With only seven minutes played, Deyverson put Alavés in front by converting a Theo Hernández cross.

Real Madrid levelled things up with just over quarter of an hour gone. Bale took a free-kick which hit the hand of Deyverson inside the area. Cristiano Ronaldo got the better of Pacheco from the spot to make it 1-1. Now it was time to start over with the vast majority of the match still to play.

Zapatazo de Cristiano Ronaldo
An injury to Pepe forced Zidane into the first change with just 24 minutes gone. Nacho came on for the Portuguese man. It was turning into a thrilling clash with both teams looking dangerous in attack but it was none other than Cristiano Ronaldo who would break the deadlock. He combined with Benzema in the 33rd minute, and lashed in a right-footed shot from outside the area. The ball struck Feddal on its way past Pacheco, making it a double for the Portuguese forward to put his team in front.

It was tense start to the second half for the midfield players. Within the first minute Camarasa found himself one-on-one with Keylor Navas, but the Whites’ keeper showed his brilliance to deny him. Alavés stepped up the pace and the Real Madrid stopper had to prove his mettle again in the 54’ after Deyverson fired a shot from the edge of the box. Real Madrid reacted quickly and Cristiano Ronaldo took a fierce shot two minutes later from just outside the area. The ball went mere centimetres wide of the home sides’ goal.

Chances for the visitors
The minutes went by and Real Madrid had not only rattled the home side and their fast pace in the first fifteen minutes of the second half but also came close to extending the deficit. Kovacic crossed in in the 69’ and Cristiano Ronaldo’ acrobatic effort went just over.

Morata scores for the third game in a row
The goal to ease the visitors’ nerves looked to be getting closer and closer. Kroos sent in a corner in the 79’ and Cristiano Ronaldo was downed in the box. The Portuguese took the penalty, but Pacheco sensed which way it was going and sent it out for a corner. Three minutes later, Morata sealed the win. A Magnificent pass with his back to goal from Marcelo, and the youth teamer chipped the keeper to score for the third game in a row. In the 88’ Cristiano Ronaldo got his hat-trick shooting with pleasure from within the box. The ring leader was back, he had to suffer to do so, but he got the three points which will prove vital in the fight for LaLiga 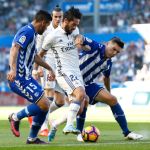