Bale scored the goal the Whites' deserved but they were sloppy in attack.
Santiago Bernabéu

1
Real Madrid have drawn with Éibar in a match they deserved to win. It was all uphill from the early stages, despite Bale having the first chance of the match with 4 minutes gone. His shot from the edge of the area could only find the side-netting, before the visitors went in front two minutes later. Capa crossed from the right on 6 minutes and Fran Rico headed the ball into the back of the net.

The Basque side's joy was short-lived though, as only 11 minutes later, Cristiano Ronaldo got away from Capa and dug out a left-footed cross to the back post on 17 minutes, where Bale was on hand to score with a fantastic header. The scores were level at 1-1 with almost the entire match still to play.

More opportunities
That's how things stayed until the break, despite both teams having opportunities to score. Pedro León tried his luck in the 20th minute but Keylor Navas was more than equal to it. Then up the other end, Riesgo needed two attempts to smother Cristiano Ronaldo's shot across goal on 31 minutes, before he just failed to find the target with a headed effort three minutes later.

Zidane took off Varane and Benzema for Nacho and Morata at half time. The Whites were dominant and going for the win. Bale crossed in the 53rd minute, Morata laid the ball back with his head and Isco got a shot off on the half-turn. The blocked ball fell to Cristiano Ronaldo, but his shot from the penalty spot was deflected behind for a corner by Lejeune. The Portuguese man had an even better opportunity one minute later when Bale picked him out in the box and his header forced Riesgo into a fine diving save.

Bale hits the post
The hosts refused to let up and their dominance was now clear. With 60 minutes gone, Kovacic crossed to Bale, who sent a great headed effort towards goal from outside the area but could only find the upright. Going into the final stretch of the game, Real Madrid continued to pile the pressure on Riesgo's goal but a lack of precision in the final third proved their downfall. The Whites gave everything they had right to the end and really deserved to get the better of Éibar, but attentions now turn to the international break. 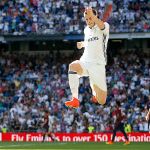