Real Madrid equalled their record of wins in a row against Osasuna with goals from Ronaldo, Danilo, Ramos, Pepe and Modric.
Santiago Bernabéu

2
Real Madrid are on great form and they showed it against Osasuna scoring goals in abundance and notching their fifteenth LaLiga win in a row, equalling their previous record in the league. The win came thanks to Cristiano Ronaldo, who made his first start of the season, scoring with practically his first touch. Bale was able to get around the back of the opposition defence in the 6’ and set up the Portuguese striker, who gladly converted.

It didn't take long to take control of the game, and as always, Real Madrid looked to improve and increase their stranglehold. They nearly did so around the ten-minute mark. the counter attack was textbook, but Kroos could only find the side netting. The Whites' domination of the game became even clearer and Bale tried to put his side ahead when he got into the box. Nauzet was forced into as Bale's shot hit the bar in the 22’.

Key minutes
As the minutes ticked by, Osasuna became more dangerous in the home side's box. In fact, Unai García had the chance to draw the game level in the 39’ but his header struck the crossbar. Real Madrid reacted instantly. Just a minute later, Cristiano Ronaldo crossed the ball in and Morata had his shot blocked by Nauzet. Danilo was on hand for the rebound and found the back of the net. There was to be more action before half time. In the final play of the half Ramos scored with a header from a Kroos corner. 3-0 at half-time.


Real Madrid continued their strong end to the first half, starting the second half in much the same way. In fact, in little more than 15 minutes the Santiago Bernabéu celebrated two more goals. The first one came for ma set-piece and was the work of another defender. Kroos took the corner in the 56’ and Pepe scored a header. The fifth came six minutes later. Modric received the ball on the edge of the box and took an arched shot, leaving Nauzet helpless.

Casilla stopped a penalty
Oriol Riera reduced the deficit in the 64’ and Casilla proved his mettle eight minutes later. Jaime Romero went down in the area and the Real Madrid goalkeeper went the right way to deny Roberto Torres' penalty. The game was back and forth and the home side could have had a sixth. Benzema hit the crossbar from inside the box two minutes before David García scored the visitor's second in the 78’.

Osasuna went down to ten men in the 79’ as Tano was sent off following a second yellow and in extra time Benzema hit the post again after trying to convert with his shoulder. The Frenchman was unlucky. Real Madrid orchestrated a goal fest and now turn their attention to the Champions League. 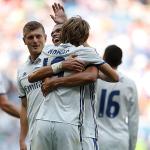