2
Real Madrid were unlucky at the Estadio Gran Canaria and drew against Las Palmas in a game where Javi Varas looked inspired and the Whites conceded a goal in the closing stages after some lucky play which saw Araujo take advantage of two denied chances. Despite this however, the Whites remain unbeaten at the top of LaLiga, one point ahead of the chasing pack.

The first goal of the game came at the half hour mark. Until that moment, it was Real Madrid who had the clearest chances. The first of those arrived in the 6’ minute. Kroos picked up the ball in the middle of the park, broke into the area and had his left footed effort denied by Javi Varas. Two minutes later the German took a free kick and Morata should have scored with his head against the hosts.

Asensio's third goal
The Whites were looking strong and in the 24’ minute had another opportunity. Bale found Carvajal between the lines and the Morata was unable to latch onto the youth teamer's back pass, which was tangled up in the legs of several home team players around the penalty spot. The goal was edging closer and arrived in the 33’. After a great bit of play from Nacho, who retried the ball, went past David García and shot with his left. Asensio headed the ball home after the initail shot was stopped by Javi Varas. The away fans' euphoria was short lived. Tana found himself one-on-one with Casilla in the 27’ and was able to get past the madridista.

The first chance of the second half fell to Bale. striking the crossbar, but Javi Varas again showed his great reflexes in the 47’. Benzema came on for Asensio in the 64’ have he could have netted immediately after entering the fray. Kroos took the corner, Varane got a touch on the ball before it hit his compatriot. The home goalkeeper was on hand to snuff out the danger on the line.

Benzema scores
The Frenchman did not miss his second opportunity however. Morata passed the ball between the lines in the 68’ and Javi Varas was superb yet again. This time he found himself one-on-one with Cristiano Ronaldo, but Benzema was on hand after the initial block to put the ballin the back of the net. The match came to a climax yet again as the Whites looked to take advantage of their possession. They were unable to and Araujo, in a lucky piece of play, was able to find the equaliser. Real Madrid gave everything right up to the end and had the chance to win the game in extra time with Isco's header which was wide of the mark. Real Madrid remain at the top of LaLiga. Now they turn their attentions to the Champions League, where Borussia Dortmund await. 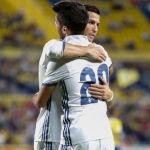