1
Real Madrid tonight deserved more, particularly after completely dominating throughout the second period, but ultimately the Whites had to settle for a draw against Villarreal. Just as was expected, given the Castellón outfit's unbeaten record, this was a tough assignement for the hosts. However, despite this result, the Whites still retain top spot.

There was little to choose between the sides in an opening half which ended in the worst possible manner for the hosts. Earlier on in the half Karim Benzema had come close to edging Real Madrid ahead. With 18 minutes played, Marcelo whipped in a cross that Gareth Bale headed back across goal towards the Frenchman, who managed to hold off two defenders before producing a towering header which brought the best out of Sergio Asenjo. Just as looked as if the sides would head in at half-time all square, in the last move of the half, Manu Trigueros unleashed an effort which struck Sergio Ramos' hand inside the area. Referee José Luis González González pointed to the spot and up stepped Bruno to tuck the ball home.

Ramos' third goal of the campaign
Real Madrid found themselves once again having come from behind. The Whites came out all guns blazing after the restart and it took the hosts just three minutes to restore parity. When the equaliser came, it was inevitably from one of Real Madrid's countless corners. James delivered the ball in and Ramos was on hand at the far post to nod home. The hosts poured forward and came within a whisker of getting their noses in front in the 50th minute, when Benzema met Mateo Kovacic's centre, but his header flashed narrowly wide of the upright.

The hosts continued to peg their opponents’ back and a goal looked increasingly likely. Dani Carvajal fired the ball across the box in the 61st minute but a lunging Cristiano Ronaldo was just centimetres away from making contact. Five minutes later, Bale came close as Benzema won the ball back on the edge of the area and laid it off to the Welshman, whose curling shot narrowly missed the target. Then, with 75 minutes gone, the whole stadium screamed penalty as Benzema fell in the area under a challenge from Víctor Ruiz.

Further chances
As the minutes ticked by, Real Madrid just couldn’t find the breakthrough that their play had merited. Toni Kroos tried his luck with 80 minutes on the clock but Asenjo smothered his shot at the second attempt. Álvaro Morata then had a clearer chance following a cross from Lucas Vázquez. The academy graduate’s header forced the visiting goalkeeper into a fine save with 83 minutes gone. That wasn’t to be the Whites final attempt of the game - those fell to the feet of Cristiano Ronaldo. His first opportunity came after a reverse ball from Carvajal, but the ball ended up in the hands of the Villarreal goalkeeper. His second was a free-kick from distance which was to meet the same fate. Real Madrid remain top of the table and must now switch their attentions to the match against Las Palmas. 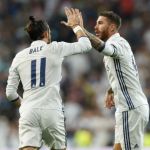