Ramos and Marcelo paraded the trophies prior to the kick-off against Stade de Reims.
The Santiago Bernabéu Trophy celebrations included a very special moment prior to the game, as the team paraded the Undécima and the UEFA Super Cup trophies to the supporters inside the stadium. The two trophies were in position and greeted the players as they took to the pitch and the fans gave a great ovation when Ramos and Marcelo, accompanied by the rest of the squad, paraded the latest European trophies, which serve to further enhance Real Madrid's legacy. 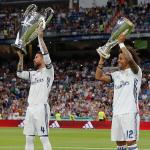