Two of the legends who lined up in the 1956 European Cup final took centre stage in the pre-match ceremonies ahead of the Santiago Bernabéu Trophy game.
Before the start of the 37th edition of the Santiago Bernabéu Trophy between Real Madrid and Stade de Reims, Paco Gento and Raymond Kopa took an honorary kick-off. Both players played starring roles in the first European Cup final, which was won by Real Madrid, with this year marking the 60th anniversary of that game.

Gento and Kopa - a former Reims player - represent two Real Madrid legends who formed one of the best forward lines in the history of the game, alongside Di Stéfano and Rial. 'The Gale of the Cantabrian Sea', as Gento is known, is the only player to have lifted six European Cups, whilst the Frenchman claimed three alongside Gento and Di Stéfano in attack. 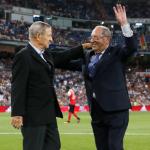