Morata got the Whites' first goal to help ensure they head into the international break with two wins from as many games.
Santiago Bernabéu

1
League football returned to the Santiago Bernabéu and Real Madrid started exactly where they'd left off, in winning fashion. They are now on a 14-match winning streak in the league. An intense second half proved decisive in clinching the win before heading into the international break. The first period finished goalless despite the Whites creating a number of good chances. Morata was the first to get a sight of goal in the 13th minute, but his left-footed shot from the edge of the area whistled just past the post.

Modric then stepped up to orchestrate three consecutive passages of play. The first, just one minute later, saw his long-range drive smothered by Sergio. Then with just half an hour gone came the best opportunity of the first half, only for him to see his effort come crashing back off the crossbar. With 32 minutes gone he forced the visiting goalkeeper into a fine save after some great work by Kroos and Bale. It was the Welshman who had the Whites' last opportunity before the break, with 40 minutes on the clock, but he could only find the hands of Sergio with his long-range effort.

Bale hits the bar
If in the first half it was Modric who was foiled by the crossbar, in the second it was Bale's turn to be thwarted by the woodwork. The Welshman struck a beautiful free-kick in the 56th minute but Sergio got just enough on it to see the ball on to the bar, as luck continued to shine on his team.

The hosts’ first goal came four minutes later. Modric retrieved the ball on the edge of the box after Sergio’s clearance and played it into Morata, who let the ball pass in order to set up Asensio. The Balearic Islander got one-on-one with the Celta goalkeeper, who blocked his shot, and Morata was on hand to take advantage of the initial block to find the back of the net with his left.

Third shot to hit the post
Having broken the deadlock, Real Madrid piled on the pressure. The second goal could have arrived just four minutes later. Kroos picked up the ball in midfield and played in Morata, who then beat Sergio one-on-one with the outside of his right foot only to see his shot hit the post. This was the third time the Whites had hit the post. Against the run of play and with the hosts playing better, Celta equalised. Orellana received the ball on the edge of the box and beat Casilla in the 67’ with a shot across goal.

Kroos the decider
Twenty minutes remained to turn the game around and the Galician box came under heavy fire. The chances kept coming and Bale had the opportunity to put the madridistas ahead in the 80’. Lucas Vázquez cut past Jonny and put in a spectacular cross for the Welshman, which he headed towards Sergio, who was able to keep it out. A minute later they were still unable to find the net. Lucas Vázquez put in another cross, this time further back, and it was Kroos who curled the shot in with one touch from the edge of the box. Real Madrid go into the international break with 6 of a possible 6 points. 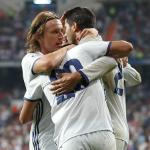