The Welshman opened and rounded off the scoring as Real Madrid began the La Liga campaign with victory in San Sebastian.
Anoeta

3
Real Madrid claimed maximum points at Anoeta, as the Whites overcame the first hurdle in their quest to lift another La Liga title. The visitors dominated from the off thanks to Gareth Bale's early opener and their dominance was reflected in the scoreline by Asensio's sumptuous finish, before Bale rounded off the scoring with the final kick of the game. This fine opening performance also ensures that Zinedine Zidane retains his unbeaten league record on the road.

Bale, who once again netted at Anoeta, set the Whites on the way to victory with the team's first goal of the campaign in the visitors' very first attack. The Welshman expertly nodded home Dani Carvajal's floated cross to make it four goals in his four visits to San Sebastian. Firmly in control of proceedings, Zidane's charges had the chances to have extended their lead, including a long-range effort from Toni Kroos on 20 minutes, which Rulli pushed behind for a corner.

Real Madrid dominance
Real Sociedad gradually worked their way back into the game prior to the break, whilst Real Madrid sought to break quickly on the counter, where Álvaro Morata provided an excellent reference point. On one such occasion, the Whites' forward drove past three defenders only to see his strike palmed away by Rulli.

Straight after this chance, Real Madrid doubled their lead on 40 minutes. Raphaël Varane knocked a sublime through ball to Asensio, who finished with real aplomb, cooly chipping the ball over the advancing Rulli. This goal sees the attacking midfielder extend his fine form in front of goal, after having now netted in first two competitive outings.

Further chances after the break
In the second period it was once again Real Madrid who enjoyed the better of the chances. Kroos again came within a whisker of scoring when his volleyed effort crashed back off the crossbar after Morata's strike was deflected into his path. Rulli again had to be at his best to deny Mateo Kovacic, pushing the Croatian's long-range effort behind for a corner.

Goal with the last kick of the game
In the final minutes, the hosts upped the tempo as they looked to reduce the arrears and the game became rather disjointed, but the Whites backline maintained their focus which resulted in Kiko Casilla hardly being forced into action. In the last move of the game, Bale rounded off an excellent victory after he latched onto a James through ball and skipped past Rulli to claim his second of the night. Following on from this triumph attentions will now swiftly turn to the Celta game. 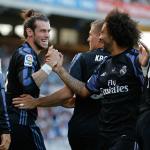