A second consecutive win for the Whites, whose attentions now turn to the European Super Cup against Sevilla.
MetLife Stadium

1
Real Madrid rounded off their pre-season tour with a second consecutive win. The first half, which saw Luka Modric, James and Sergio Ramos handed their first action of the season, ended goalless. The former two came off at half-time for Mateo Kovacic and Marco Asensio respectively, whilst the captain was replaced on 62'.

Both sides enjoyed periods of dominance in the opening period, but it was Bayern who posed the greater threat, as the Germans' superior fitness shone through in this, their fourth pre-season outing. A David Alaba free-kick crashed off the woodwork on 25' and just one minute later Julian Green was unable to get the better of Kiko Casilla  when clean through. The Real Madrid goalkeeper came to his side's rescue in the 33rd minute to deny Thiago when he let fly with a fine strike from the edge of the area.

The flow of the game changed in the second half, with Álvaro Morata coming close to breaking the deadlock on 59'. The move was started by Marcelo who tricked his way past two opponents and picked out the academy graduate with an inch-perfect pass. The Real Madrid hitman shrugged off one defender when feinting to shoot, but then contrived to send his effort inches ride of the upright. The Whites were enjoying their best spell of the game and Isco - just before being replaced - confirmed the Whites' supremacy just two minutes later. With 61 minutes on the clock, the Spain international picked the ball up on the edge of the box and caught Bayern off guard with an effort which cannoned back of the woodwork.

Sensational strike from Danilo
You got the feeling that it wouldn't be long before the European champions scored and the goal did come on 79'. It was Danilo who got it after a fine piece of individual play. The Brazilian collected a pass on the right flank, before cutting inside and unleashing a thumping left-footed drive which flew past Sven Ulreich in the Bayern goal. This is how it ended as Real Madrid concluded their pre-season tour with a win, with attentions now turning to the European Super Cup showdown against Sevilla on 9 August. 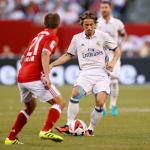