“It's an honour to have a club as prestigious as Real Madrid here”, added the striker, who is currently playing for the Montreal Impact.
Didier Drogba, who is currently plying his trade for the Montreal Impact, paid the Real Madrid players a visit after the team's first training session of the day. The forward chatted with members of the squad and the coaching team, before speaking to Realmadrid.com and Realmadrid TV. Drogba, who has enjoyed a lengthy career in which he has won the Champions League and four Premier League titles, poured praise on Cristiano Ronaldo: "I played against Cristiano in the 2008 Champions League final that Manchester United won. He's a real leader and he deserves to win the Ballon d'Or for his great performances both for Real Madrid and Portugal. Although he wasn't on the pitch at the final whistle, he was still the main reason why they got that far".

"For the Montreal Impact it's very significant that Real Madrid are training here, given the history of the club. It's important to see how such a major team go about their work. I've played against Real Madrid many times, with Marseille and Galatasaray and I've also lined up against Zidane. Real Madrid is a really great club and an extremely prestigious one. It's an honour to have them here."

His time in Montreal
"It's proving to be a marvellous experience after having played in Europe and Asia. I always wanted to play in MLS. It's a big city and the fact that the language here is French is also a help. The people are very friendly and I'm really enjoying the city. There are European clubs who don't have comparable facilities to those that we have at our training complex and it's important that we fill our stadium every weekend". 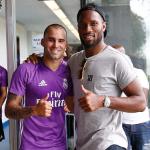