Thousands of fans waited for the champions at the first stop on the route. The mayor of Madrid Manuela Carmena welcomed the team and congratulated them: "Thank you very much to the club and all of the players. I would like to thank you on behalf of all of Madrid, who are enormously grateful to you".

The best
"You are a unique team, you are the epicenter of this city. You are fundamental and decisive. You are the best, it's true. You played an amazing game against an extraordinary opponent. The history of Madrid is linked to Real Madrid and this is your home".

Florentino Pérez: “Capable of achieving the impossible”
“Being in the Town Hall in an essential meeting because here we’re with all the people from Madrid. These players, led by Zidane, are capable of achieving what for many is impossible. Thanks to our fans, that are beside the club in every moment and our footballers who never ever give in. I would like to offer my respect and acknowledgement to Atlético, a formidable competitor and a friend and neighbor".

"This Champions League is dedicated to more than our city, the 16 supporters in the Madrid Supporters group in Iraq who did a few days ago as victims of terrorism. Last night, in Baakouba, near to Bagdad, during the final, a place for madridistas was attacked again and the early information says that a dozen human beings were assassinated and various injured. Out victory also goes to them"

After the speeches, gifts were exchanged. Florentino Pérez gifted the mayor with a replica of the Champions League and a Real Madrid shirt. In return she presented the Whites with some cufflinks with the skyline of Madrid. The visit was concluded with the Whites waving from the balcony of the Town Hall.

The Community of Madrid
The Champions then moved to the Real Casa de Correos, head offices of The Community of Madrid. Before starting the event, a minutes silence was held for the victims of the attacks on a madridista supporters group in Iraq. Just like in the Town Hall, gifts were exchanged. Florentino Pérez gave a replica of la Undécima and a Real Madrid shirt, while the president Cristina Cifuentes returned the gestured with a commemorative plaque.

Florentino Pérez: “Hard work, humility and talent"
“It's an honour to be here. La Undécima is a result of our philosophy: a Real Madrid that works until the end, who never allows complacency and with players who display hard work, humility and talent. Thanks to the players and thanks to Zidane because la Novena, la Décima and la Undécima are all linked to your name".

“We have won this title against an excellent opponent and we want to acknowledge Atlético de Madrid and their fans. We have got la Undécima, it's our second Champions League in three years. Our history says that we now have to work for la Duodécima. It's our new mission".

Cristina Cifuentes: “You are the best, congratulations”
"This home is for all of the madrileños and all of the madridistas. It's an honour to receive Real Madrid and a very happy day for all the madridistas. It is also a day tinged with pain with the news from Iraq. I send my sentiments to the victims. The values of sport have to be above whichever ideology and beliefs. I would also like to congratulate Atlético, who were a great opponent. Madrid has become a reference around the world".

The moment everyone was waiting for was when the players went out on to the balcony at the Real Casa de Correos to offer la Undécima to the madridistas at Puerta del Sol. After the official visit, the champions set off towards the Santiago Bernabéu to end the festivities celebrating Undécima with the fans. 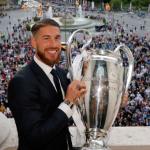