President Florentino Pérez took the trophy which can be seen in the 'Kings of Europe' room.
La Undécima can already be seen on the Bernabéu Tour. Early today, President Florentino Pérez took the latest European Cup won by Real Madrid to the stadium. It can be seen alongside the other ten in the trophy cabinet inside the Kings of Europe room. It's an impressive and unique space with a light and sound show as well as a shower of confetti.

The supporters can now enjoy the title won in Milan and have their photographs taken with the 11 cups that make the Whites the best in the world. In front of the trophies there is an 18 meter screen with an audiovisual instillation that allows an ingenious game to discover some commemorative objects and review the 11 titles. 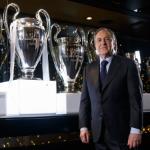