Two goals from Cristiano Ronaldo and one from Benzema sealed the win against Valencia for the Whites, who notched their eleventh straight win in the competetion.
Santiago Bernabéu
3

2
Real Madrid will be fighting for this La Liga title right up until the last minute. Following Atlético's loss away to Levante, Real Madrid are now second and will fight against Barcelona for the title. The Whites showed this once again against Valencia, having secured another three points and claiming their eleventh straight win in La Liga.

Real Madrid took the lead just before the half hour mark, however one minute before scoring Cristiano Ronaldo had another clear chance to do so. A fantastic long pass from Kroos in the 25' and the Portuguese player, having controlled the ball excellently, was unable to beat Diego Alves one-on-one. This was a warning as in the next play he made it 1-0. He received the ball at the edge of the box, struck the ball before Abdennour could reach it and defined perfection as he fired a shot across his body from the edge of the box.

Lucas' chance
The Whites had already done the hard work but would not settle for that and wanted to increase the gap. They came close in the 34'. Marcelo crossed, Lucas Vázquez struck it with his head and Diego Alves stretched impressively to keep it out. The visitors reacted and three minutes later had a great chance to level the scores. Cancelo's shot, with Casilla already beaten, could not find the back of the net.

Benzema's goal
It seemed that things would stay this way as the break arrived, but Benzema was on hand to score the second. Cristiano Ronaldo crossed in the 42’ and another fantastic save from Alves looked to have saved his team as the French forward shot, having received the ball with his back to goal. Play continued and the Frenchman picked up the ball from Cancelo to beat the Brazilian goalkeeper at the second opportunity. The Whites were not giving in.

Real Madrid came out in the second half looking stronger and more assertive and in the 49’ Benzema had the chance to score his second. Lucas Vázquez crossed and the Frenchman’s header was put out for a corner by Diego Alves with another great stretch. The visitors hit back in similar fashion when Parejo hit the crossbar with his free kick following a foul in the 53’. Valencia reduced the deficit two minutes later. Rodrigo pounced on Varane's clearance to beat Casilla from around the penalty spot.

The Whites' third
Real Madrid didn't take long to react, scoring their third just six minutes later, following a pass between the lines from James to Cristiano Ronaldo, who beat Diego Alves with his left in a on-one-one to rack up yet another brace. The second half was a vibrant affair and in the 61’ it showed yet again. Parejo shot with his left and Casilla, with a great intervention, got enough of a touch on the ball to keep it out and palm it onto the post. The Whites goalkeeper proved his mettle ten minutes later by sending Alcácer's shot from inside the six yard box out for a corner.

Ovation for Arbeloa
Zidane put on Arbeloa in the 79’ in place of Cristiano Ronaldo. The former Real Madrid youth team player received an impressive ovation, and ended the game wearing the captain's armband, in what will be his last game in the Bernabéu wearing the Real Madrid shirt. Casilla kept up with his impressive performance, and in the 80th shone in yet another one-on-one, this time against Rodrigo. He was unable to replicate this in the 81st after André Gomes' shot from the edge of the box. 3-2 with just ten minutes left to play, however Valencia had to see it out with one player less following the expulsion of Rodrigo who received a straight red card. The Whites were able to see the win through and La Liga will now be decided on the final match day. 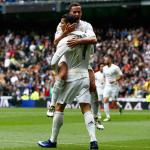