The Whites beat Atlético in an epic final played in Milan, which went to penalties (5-3) following goals from Ramos and Carrasco in normal time.
Giuseppe Meazza

1
It meant suffering until the final second but few teams are as reliable as Real Madrid in a European Cup final. Despite playing practically the entirety of extra time without substitutes and Bale, Cristiano Ronaldo and Modric clearly struggling, The Whites, two years after beating Atlético in Lisbon, regained their continental dominance and lifted la Undécima to sky in Milan after an epic game, which showed no respite and was decided by penalties.

From the start the Whites looked focussed, united in the fight for a common aim. They came close to scoring in the 6th minute, but Oblak saved his team, blocking Benzema's shot from inside the six-yard box following Bale's free kick. He was unable to do the same nine minutes later. The goal, from Ramos just as in Lisbon, also came from a free kick. Kroos put the ball in play, Bale got a touch and the Real Madrid captain found the back of the net putting it past the rojiblanco defence.

Missed penalty
Despite the goal, Atlético did not change one aspect of their game plan and kept to it as they had started. They had to wait for a foul in order to penalise their rivals who were compact and showed no signs of cracking. There would few chances more between then and the break apart from a few timid shots from Griezmann which didn't trouble Keylor Navas.

The second half started at a much higher pace. Two minutes after the restart, Clattenburg blew for a penalty as Pepe upended Torres, but Greizmann crashed the ball against the bar from the spot. Despite the scare, everything continued in the same vein, although Zidane was forced to bring off the injured Carvajal after 52 minutes and sent Danilo on in his place.

Clear chances for Madrid
The minutes passed and things were looking favourable for The Whites, who came close to increasing the deficit with 70 minutes gone. A great pass from Modric presented Benzema with a gilt-edged chance but Oblak was perfectly placed to deny him. An equally clear-cut opportunity fell Bale’s way on 78 minutes, but Savic cleared off the line.

Carrasco levels it up
One minute later and the scores were level. Juanfran crossed from the right and Carrasco tapped in. All square with eleven minutes to go. Extra-time loomed large. It would take 120 to find out who would be the champions and Real Madrid were dominant in the early stages of the extra period. They created the first dangerous attack when Isco took a corner on 94 minutes and Cristiano Ronaldo’s shot ended up in the arms of Oblak. There were not many more chances in the first half of extra-time, and the second was much the same aside from Casemiro’s long-range strike on 107 minutes.

Penalties to clinch la Undécima
It all came down to penalties. The key moment came when Juanfran, crashed the rojiblanco’s fourth spot-kick against the post. Cristiano Ronaldo, just as Lucas Vázquez, Marcelo, Bale and Ramos before him, made no mistake from the spot and earned Real Madrid another European Cup. La Undécima is ours. 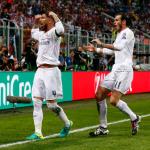