Real Madrid reach the Champions League final after seeing off Manchester City at the Santiago Bernabéu, which played host to another great night of European football.
Santiago Bernabéu

0
Real Madrid have claimed their place in the Champions League final, to be played in Milan. The Whites did precisely what they need to do to book their ticket to the final. They had to win and they did just that, courtesy of a first-half Fernando own goal. After getting themselves ahead, Zinedine Zidane's men succeeded in keeping a clean sheet, just as they have done in all of this season's Champions League home games. Real Madrid now face Atlético at the San Siro on 28 May.

With the backing of the home faithful, the hosts dominated proceedings as they pressed high up and managed to regain possession very quickly. It didn't take long for Real Madrid to start threatening. Indeed, it took the Whites just 20 minutes to get their noses in front.Dani Carvajal slipped Gareth Bale in down the line and the Welshman fired in a right-footed cross which deflected off Fernando and looped up and past Hart.

Ramos goal chalked off
The Whites didn't sit back on their lead and went in search of a second, which would have given them some breathing space. The hosts had the ball in the net on 36 minutes, but Sergio Ramos' effort was ruled out for offside. Before the first half was out there was time for each team to fashion a chance. With 41 minutes on the clock, Bale unleashed an effort from distance, but his shot was gathered in by Joe Hart. Just two minutes later, Manchester City had an even more clear-cut opportunity, as Fernandinho's drive from the edge of the area struck the outside of the upright.

The second half got off to a lively start and the madridistas could have scored a second on 51 minutes. In fact, they had two chances in quick succession. Carvajal played Jesé in, but he sent his effort off high over the bar. The second chance saw Modric latch onto a Bale pass but he was unable to get the better of Hart when through one-on-one. The Whites were pouring forward and they were making some real inroads into the City box. Lucas Vázquez, who came on for Jesé on 55 minutes, spotted Cristiano Ronaldo's run in behind and he laid the ball into the space and the Portuguese forward, who was slightly off balance, sent in a powerful drive which was turned away by Hart.

Bale hits the woodwork
Real Madrid deserved to have got a second and they had a chance to have doubled their lead on 64 minutes. Toni Kroos whipped over a corner and Bale rose highest, but his header bounced off the angle of post and bar and stayed out. After this, the game became disjointed and the Whites, aware that this scoreline would take them through, defended resolutely as City barely threatened. Only a long-range effort from Sergio Agüero which flew narrowly over the bar on 89 minutes had the Bernabéu with their hearts in their mouths. Real Madrid have booked their place in the Milan final, where they go in search of their eleventh European Cup. 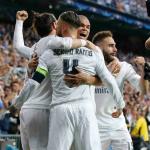