Two Cristiano Ronaldo goals sealed victory for The Whites who have won their last 12 games in the league.
Riazor

2
No blame can be laid at Real Madrid's door as they concluded their La Liga campaign in La Coruña by completing a historic run of 12 consecutive victories. In less than half an hour, The Whites had the game wrapped up at Riazor and ensured they finished the job in fighting for the title to the end, but the result in Granada didn't go in their favour.

The madridistas set their stall out from the start. They knew they had no chance without a win and were in control from the off. Moving the ball quickly and with penetration, quick to win it back when it fell to their opponents, Madrid wasted no time in taking the lead. They did so after seven minutes in a passage of play that was trademark BBC. Bale received the ball off balance on the left and slipped past Manuel Pablo with a lovely piece of skill before crossing towards the penalty spot. Benzema got just enough on the ball for it to roll to Cristiano Ronaldo, who put it in the back of the net with his left foot.

Second goal
With The Whites already in the lead, the second goal came halfway through the first half. Kroos took a corner in the 25th minute and Cristiano Ronaldo met it with a header. The ball struck Mosquera before nestling in the hosts' net. These were the visitors' best moments and the Portuguese forward would continue to be the main threat, hitting the woodwork on two occasions. He brought down a long ball from Pepe in the 29th minute before firing against the post in a one-on-one with Pletikosa. Three minutes later his shot from the edge of the area could only find the crossbar.

Zinedine Zidane brought Cristiano Ronaldo off in place of James at the break. With the job done here and the Champions League final two weeks away, Real Madrid took their foot off the gas, which saw Deportivo begin to offer a greater goal threat.

Navas's stops
This was when Keylor Navas came into his own, as the Costa Rican was called upon to produce two fine saves. Firstly, he produced a sprawling stop to deny Lucas Pérez on 54 minutes. Then, with 71 minutes on the clock, Róber had a far more clear-cut opportunity, but his point-blank header from a corner was kept out by the Whites' custodian in a masterclass in reflexes.

Real Madrid reacted and on 79 minutes the visitors came close to adding a third. Isco slipped a through ball to Carvajal and it was the Andalusian midfielder who got himself on the end of the wing-back's cross, but his headed effort flashed just inches wide of the upright. Further chances fell to Marcelo (on 85 minutes) and James (87 minutes), with the Brazilian's strike bringing the best out of Pletikosa, whilst the Colombian's effort shaved the woodwork. The Whites got the job done at Riazor as attentions now turn to the Milan Champions League final against Atlético. 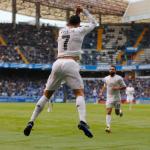