Two goals from Bale and one from Lucas Vázquez give the Whites three points at Vallecas.
Vallecas

2
3
Real Madrid got the job done in the fight to keep up with Barcelona and Atlético Madrid in the league, getting three important points against Rayo at Vallecas. It was a difficult game from the start for the visitors and it was the Whites who got the first shock of the game. A powerful shot from Bale on the edge of the box in the 3’ minute saw the ball hit the post. Four minutes later the home side scored. The move came from Bebé on the left wing, crossing the ball into the area and for Embarba to score.

The game became even more difficult in the 14' minute. A corner from Trashorras, the ball came into the area and Miku rifled the ball past Navas. With the odds against them and the stadium getting behind the home side, Real Madrid slowly started to change the game by keeping possession and then narrowing the deficit in the 35’ minute. Kroos took the corner and Bale scored a header. 2-1 with plenty of time left to play.

Bale
The Welshman had the chance to level the score in the 42’ minute, but his shot from the edge of the box went just wide of the Rayo goal just a few seconds after Lucas Vázquez came on in place of Benzema, who went off with an injury.

The Whites didn't take long to equalise after the break. The goal itself was beautifully crafted. Danilo crossed, having already given an assist against Villarreal on Wednesday, and Lucas Vázquez jumped higher than anyone in the 52’ minute to make contact and score a header that Juan Carlos could do nothing to stop. The scores were now level after Real Madrid had gone 2-0 down and they were now showing themselves as strong candidates to win La Liga.

Spectacular reaction
The visitors' raid grew stronger and in the 60’ minute. The Whites had a double opportunity, both of which featured Bale. The Welshman curled in a ball for the first one, which left Jesé one on one with Juan Carlos, but the home side's goalkeeper kept his cool. In the second opportunity he assisted Lucas Vázquez, who was unable to convert from around the penalty spot.

Speed
It was an end-to-end affair and Real Madrid stepped up a gear like no-one else. The speed of Lucas Vázquez and Bale caused Rayo further problems, and they found themselves retreating further back each time. It was the Welshman who sealed the comeback for the visitors in the 81st minute. He took advantage of the home team's defensive error to find himself face-to-face with Juan Carlos and put the ball past him. Two goals for Bale wrapped up a sensational comeback. The Whites got the job done and can now focus on the first leg of the Champions League semi-finals. 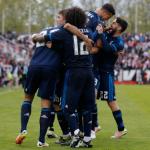