Zidane's boys make no mistake and put the pressure on their rivals in the fight for La Liga.
Coliseum Alfonso Pérez

1
5
“We've closed the gap from 13 points to 4, we won't let our guard down now'”, said Zidane in yesterday's press conference. Today, at the Coliseum Alfonso Pérez, his players backed up those words with a  goal fest at Getafe, making it a seventh consecutive victory, putting themselves just one point off the top spot and putting the pressure on in the fight for the championship.

They had two clear chances to score before the midway point in the first half. The first fell to James in the 4th minute, but his right-footed shot was put behind for a corner by the hosts' goalkeeper. The second came 12 minutes later when Cristiano Ronaldo struck the post with a strike from the edge of the area. It looked as though it'd be just a matter of time before the visitors got a goal, and so it proved when James crossed from the right in the 29th minute and Benzema, alone on the penalty spot, tucked the ball into the net with his left foot without it even touching the ground.

The Whites' had already achieved their objective, but they weren't about to relent in attack, and they came close to increasing the gap. Cristiano Ronaldo, off balance, shot inside the area two minutes later and the ball struck the body of Guaita. That was just a warning, as the madridistas scored another five minutes before the teams headed into the changing rooms at the break. It was a textbook counter attack finished in spectacular fashion. Isco played a one-two with Benzema, the Frenchman returning the ball with his left foot before the Spanish international beat Guaita with the outside of his right boot to make it 0-2. Real Madrid were well on track at the break.

Bale sealed it
It didn't take The Whites' long to finish the encounter off. Just five minutes after the restart, Benzema sent a fantastic deep pass towards Bale who beat his man for pace and finished perfectly past Guaita. It was Benzema's second assist of the match.

Cristiano Ronaldo rounded off the goal fest
Aware that a match against Villarreal awaited them on Wednesday at the Bernabéu, the madridistas were now content just to maintain control of the match. In the 83rd minute, Sarabia reduced the deficit with a great strike from the edge of the area and the goal spurred the visitors on once more as James and Cristiano Ronaldo rounded off the goal fest in the last five minutes. It was Real Madrid's seventh consecutive win in La Liga, and it puts the pressure on those above them in the table. The madridistas achieved their goal. 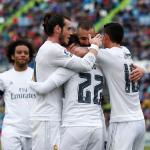