The Whites make no mistake at Anoeta and the Welshman's goal seals a tenth consecutive victory in La Liga.
Anoeta

0
1
Real Madrid made no mistake in their battle with Barcelona and Atlético to win La Liga as Bale's goal in the second half at Anoeta sealed a tenth consecutive league victory. The visitors came out full of intensity, and after just five minutes they had a clear chance to take the lead. James recovered the ball and gave it to Bale, who shot wide with his right foot.

It would take the visitors only four minutes to threaten their opponents' area once again. This time, Rulli did intervene, tipping James' dipping strike behind for a corner after the midfeilder had beautifully controlled a magnificent pass from Nacho.

Height a big threat
Real Madrid were dominating, and their strength from set pieces was becoming clear. Modric took a corner in the 12th minute but Ramos couldnt' find the target with his headed effort. Three minutes later, it was James who sent the corner in, and Bale's powerful header flew just centimetres over the Real Sociedad goal. They were the best moments for the visitors, but they failed to produce a goal.

The madridistas continued to look dangerous, and they created another clear opportunity to score when James crossed from the right in the 21st minute, and a lively Bale headed towards goal, but the ball shaved the wrong side of the post. It wasn't to be the last of the first half though, and perhaps the clearest chance so far arrived in the 40th minute. It was great play from Nacho, who burst into the area, and his shot beat Rulli after striking a defender, but Mikel was able to clear. The Whites' deserved to be leading at the break.

More chances
The second half was a more open affair, but it was Madrid who continued to create the most significant opportunities. In the 57th minute, Bale had a clear chance to put his team ahead. James crossed from the left, the ball broke loose in the area and the Welshman shot, right in front of goal, but Rulli intervened superbly to save his team.

Deserved reward
As the minutes passed, poor finishing was proving a problem for the visitors. Jesé tried his luck from the edge of the area with 78 minutes gone and his shot was pushed behind by Rulli for a corner. Just two minutes later, the reward they deserved arrived. Lucas Vázquez crossed and Bale rose highest to send the ball into the back of the net with his head. The Whites had found it very tough to get in front, but now all they needed to do was defend their advantage. They managed to do just that, and show that their La Liga title challenge is still very much alive. 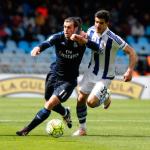