Real Madrid, who produced an excellent second-half performance, deserved the win against Manchester City, but the tie will be decided back on home soil next Wednesday.
Etihad Stadium

0
Real Madrid deserved to have got more from their game against Manchester City. After a tactical first half, Real Madrid dominated in the second period, in which they created several chances. Conscious of what was at stake, the first half saw both sides barely create any chances.

The Whites, who were without Cristiano Ronaldo, started well as a team, and hardly afforded the hosts any space. Indeed, the visitors were the only side to trouble either goalkeeper in the first half. That effort came on 34 minutes from Gareth Bale, who unleashed a shot from the edge of the area, but his deflected effort was comfortably collected by Joe Hart.

Jesé replaces Benzema
At half-time Zinedine Zidane turned to Jesé, who came on in place of Karim Benzema. With 54 minutes on the clock, Sergio Ramos came close to putting Real Madrid ahead. The captain met a Toni Kroos corner, but this header was gathered in by Hart. Gareth Bale and Lucas Vázquez swapped flanks as the Whites began to enjoy more of the possession and Kroos tried his luck from the edge of the area on 65 minutes, but his shot flew wide of the target.

The Whites came close to capitalising on their superiority in the 71st minute. They combined effectively to break free from the hosts’ pressure, and the ball arrived at the feet of Carvajal, who found Jesé with his cross but the academy graduate's header crashed off the crossbar. The visitors were enjoying their best spell of the game, as they discovered a way of getting the better of Manchester City’s central midfielders.

Visitors enjoy their best spell
The Whites deserved a goal and it seemed as though their reward was edging closer. Kroos’ corner in the 80th minute was met by Casemiro, who rose highest, but his header was cleared, with some difficulty, by Hart. Real Madrid were causing havoc with every set piece and another corner produced their clearest chance. Just two minutes later, Kroos' whipped delivered flicked off Ramos and found Pepe right in front of goal, who fired the ball into Hart's chest. The reward they deserved never materialised and progress to the final in Milan will be decided next Wednesday at the Bernabéu. 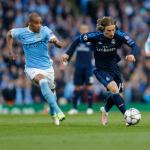