Four goals from the Portuguese player, and others from Pepe, Jesé and Bale sealed a spectacular win against Celta.
Santiago Bernabéu

7
1
Real Madrid, led by Cristiano Ronaldo, enjoyed a spectacular thrashing of Celta. Everything was forged in the second half as in the first, which was vibrant, although involved only goal. Celta were first to send out a warning shot. Orellana crossed in the 13th minute and Aspas, from the penalty spot, hit the post with his header. Following the rebound, Navas displayed his reflexes and kept out the shot from the Galician forward.

The home side only took seven minutes to react. Cristiano Ronaldo, out on the left, got away from a defender with a step over and forced a great save from Rubén Blanco following a strong shot from the edge of the area. The Whites had another chance before the halfway point in the first half. It came following a corner where Pepe crossed from the back post and Isco controlled the ball, feinted to trick his rival and shot, however Rubén Blanco on the line once again prevented the Whites from taking the lead.

The first goal
The home side were doing a lot of damage from dead ball situations and that was the case again in the 40th minute. Isco took the free kick and Casemiro surprised everyone with a headed shot at the back post. When a goal looked certain the visitor's keeper once again put out a saving hand to send the ball for a corner. It was the prelude to the first goal of the match. Isco took the corner, and Pepe scored from a header.

Half time arrived, but five minutes after the restart the Whites pulled away from their opponents. The goal was beautiful crafted goal. Cristiano Ronaldo gained control of the ball in centre of the field, ran several metres with the ball at his feet and launched a rocket at the edge of the box that Rubén Blanco could not stop.

Another work of art
The Portuguese players exhibition did not stop there. Only eight minutes later he pulled another goal out of the bag, which was equally beautiful to watch. This time it came from a foul. Ronaldo placed the ball carefully on the edge of the box and fired in under the bar with such guile that Rubén Blanco could only watch as it went in. A brace from the Portuguese star who could have had another in the 60th minute. It was another free kick, although a little further out, and only the hand of the Celta goalkeeper onto the crossbar could keep it out.

Hat trick in a quarter of an hour
Aspas reduced the deficit in the 62nd minute but the Bernabéu didn’t have to wait long to see Cristiano Ronaldo score his hat trick, in which he capitalised on a great assist from Isco two minutes later. He reached the summit of the club’s all time goal scorer list, in which he had previously overtaken Zarra as second highest goalscorer in La Liga with 350 official goals for Real Madrid. Only he is capable of achieving the impossible, as in the 76th minute. Jesé took the corner and the Portuguese, sealed his quadruple with a header.

Jesé and Bale add the finishing touches
Only a minute afterwards, and just following Celta's restart, Jesé scored the sixth following a great individual move and Bale, who came on in the 65th minute as a substitute for Isco, got one of his own with a shot to the far post from the edge of the bar in the 81st minute, closing out the goal fest. It was a magnificent victory, built around a spectacular second half with six goals scored. Now, thoughts turn to Roma. 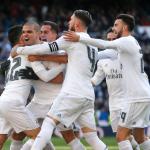