Goals from Benzema, Cristiano Ronaldo, Bale and Jesé add the finishing touches to a month in which Madrid have won all their games.
Santiago Bernabéu

4
0
Real Madrid were amongst the goals against Sevilla before the international break, ending the month of May having won all their games. They couldn't have started any better against the team from the south. With only six minutes on the clock the Whites were ahead. Bale delivered with his right foot to Benzema who struck it first time to open the scoring. Spectacular from the Frenchman who came back in style from injury.

The madridistas were already in front and ten minutes later should have doubled the lead. A Bale shot from the edge of the area was turned behind thanks to an excellent save from Rico. The resulting corner saw Cristiano Ronaldo head to ball goalward where the Welshman nudged the ball in. Referee Estrada Fernández ruled out the goal for a nonexistent off side.

Keylor saves another penalty
Real Madrid were in control with chances flowing. Cristiano Ronaldo almost got the second on 22 minutes. The Portuguese forward arrived on the edge of the box, faced up with Koke and surprised with a powerful shot which Sergio Rico saved well. Five minutes later Keylor Navas' moment arrived. A penalty awarded for a Varane foul on Rami saw the goalkeeper guess right to stop Gameiro’s effort from the spot, turning the shot away. The keeper again got a great ovation from the stands. And rightly so, having saved three of the four penalties he's faced this season.

From then to the break it was all Real Madrid, who arrived in the visitors area time and time again. The second half started in the same way. The home dominance grew stronger and stronger and in the 57th minute they had their best opportunity to confirm their superiority. Modric went down in the area in a battle with Reyes, but Cristiano Ronaldo was unable to convert from the spot.

Denied by the Bar
The Whites kept pushing for more. A Kroos corner on the hour mark was met by Bale who was denied another headed goal by the bar. Sevilla could have drawn level 2 minutes later. Gameiro scored but the goal was disallowed for another inexistent off side. The home team made the most of this and in the 64th minute an assist from Danilo was finished by Cristiano Ronaldo. With 28 goals he's the top scorer in La Liga.

The BBC getting the goals
Real Madrid were on fire and only two minutes later Bale scored after a great counter attack which saw him become the British player with the most goals in the history of the Spanish league. The Welshman went off to great ovation in the 70th minute, replaced by Jesé. And it was the substitute who signed off with the last goal of the night in the 86th minute, seeing the Whites finish the month of March having won all the games they have played in. 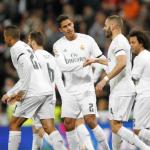