Goals from Cristiano Ronaldo and James hand Real Madrid victory over Roma as the Whites take their place in the quarter-final draw to be held on 18 March.
Santiago Bernabéu

2
0
Real Madrid sealed their place in the Champions League quarter-finals with a win over Roma. The Whites had won the first leg by 2-0 in Rome and they reproduced the same result in the return leg to secure their qualification for the next stage. The first half ended goalless despite being a lively, intense affair. The hosts were the first to create any danger, after Gareth Bale and Marcelo combined down the left flank. With eight minutes on the clock, the Welshman spotted the Brazilian in space and the latter's strike flashed just wide of the upright.

The Roma response came eight minutes later after some excellent individual play from Salah saw Dzeko fire wide when clean through on goal. At this stage the surprising thing was the neither side had managed to break the deadlock, and this was even more so the case after the two subsequent opportunities fashioned by both sides. The first of these fell to Real Madrid on 21' when Modric's strike from the edge of the area has Szczesny struggling. The Italians created an even clearer chance when the referee failed to award the hosts a free-kick after Digne had fouled Danilo and the pacey Salah found himself through with just Navas to beat but his effort hit the side netting.

Chances
The game was only 30 minutes old but the chances kept coming. On 31' Cristiano Ronaldo brought the ball down out on the left flank and forced a fine save from Szczesny, who was again called into action three minutes later in a one-on-one against the Portuguese forward, who got away a shot despite stretching to meet the ball. There would be one further chance in the first half, this time it fell to Casemiro, who picked up the ball on the penalty spot on 40', but his effort was gathered by the Roma custodian.

The second half began in similarly lively fashion, within the first five minutes both sides had opportunities to have taken the lead. Both chances came after a series of deflections, for the hosts, Marcelo produced an acrobatic effort from the penalty spot which saw Szczesny produce a fine save. After this, Salah once again found himself clean through but the Egyptian failed to hit the target.

Cristiano Ronaldo fires home
The game was a really open affair and the visitors had two chances on 56', but both Florenzi and Manolas were denied by an inspired Keylor Navas. Despite these chances, it was Real Madrid who broke the deadlock. The goal came from the right flank where on 64' Lucas Vázquez, who had only replaced Gareth Bale some three minutes earlier, got past Digne and crossed for Cristiano Ronaldo to stab home after holding off the attentions of a Roma defender. The Portuguese forward now has 13 goals to his name in this season's competition.

James puts the game to bed
Only four minutes later, James double the home side's advantage when he was on hand to finish off a counter-attack. The Colombian received a pass from Cristiano Ronaldo before firing between Szczesny's legs. This result sees Real Madrid qualify for the quarter-finals for the sixth successive season. The Whites will discover their next opponents in the draw to be held in Nyon on 18 March. 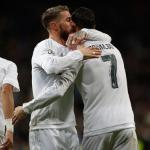